Here are all the Australian flag designs I made over the years. Like my New Zealand flag proposals, I put in a lot of effort researching and designing these proposals. This time, James Fitzmaurice was only indirectly involved. Australia has not had an official flag competition or referendum yet but I’ll be ready once it happens! 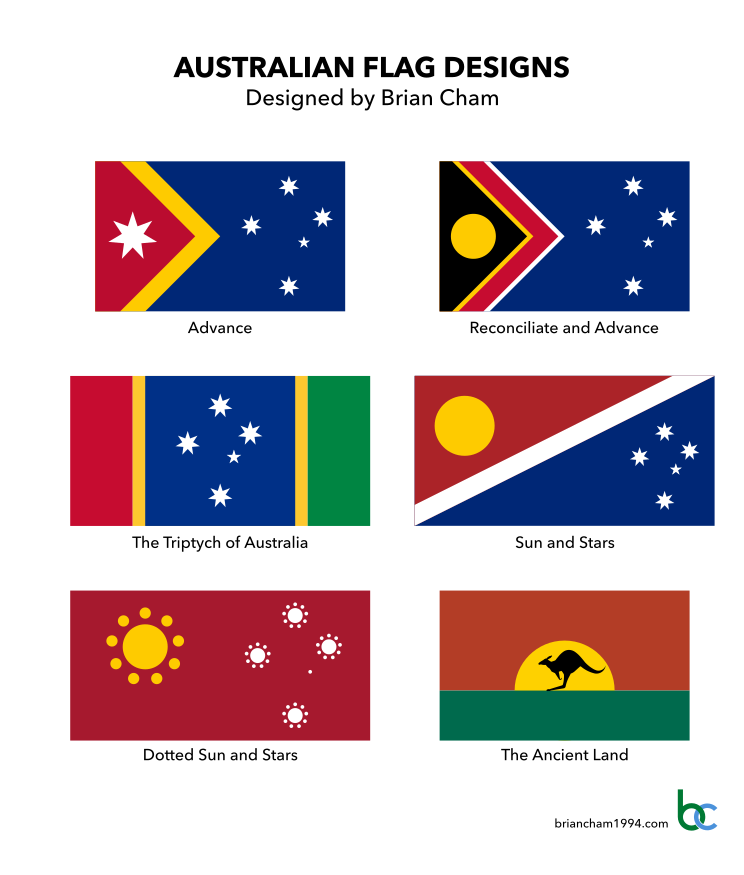 2.3 The Triptych of Australia

Instead, I aimed for maximum feasibility, i.e. a flag with the highest public resonance and therefore the highest probability of winning a vote against the current flag. Instead of activating the aesthetic part of my brain and asking what resonates with me, I activated the sympathy part of my brain and asked what resonates with others. To fully ground this, I did a lot of research.

This research included studying every single existing Australian flag proposal, noting the common features, reading all the feedback and analysing why some designs were more popular than others. I also looked at Australian themed insignia, logos and graphics. Finally, I consulted surveys and campaigns.

By collating all the commentary behind existing proposals, I listed all the common mistakes so I could transcend them all.

What are the themes of national identity? I identified four of them.

By clarifying these, I can make designs that harmoniously appeal to multiple themes, which will resonate with more people. The “established symbolism” has the most appeal so an effective design will have to focus on this.

The themes are summarised in the Euler diagram below. 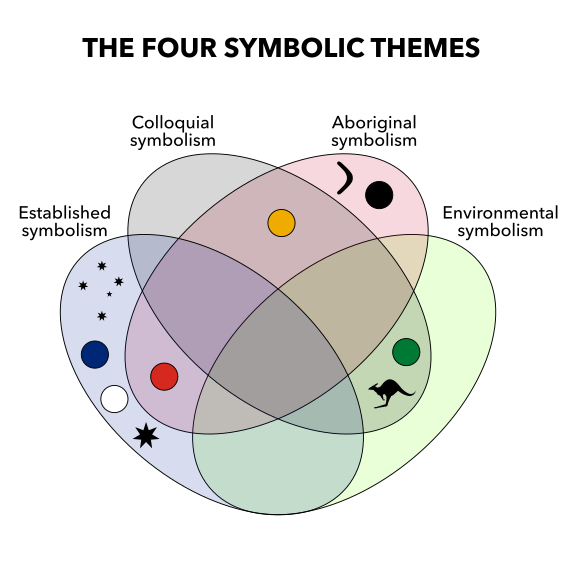 Sometimes, flag proposals compete head-to-head in ranked competitions or discussions. Based on these, I used a statistical technique called a “regression analysis” helped to identify which elements (colours and symbols) are most associated with success (public resonance). These successful elements are the colours red, white, blue and gold, and the southern cross in its current form (i.e. white on blue).

The proposals are below, roughly in order from most to least feasibility (i.e. probability of winning against the current flag in a national vote). The “main” proposals are the four most feasible ones.

The best symbolism is that which does not need to be explained, so I am confident in letting all of our flag designs speak for themselves.

This one is the simplest and most elegant of my proposals. If it seems annoyingly familiar, you are probably thinking of Captain Marvel. 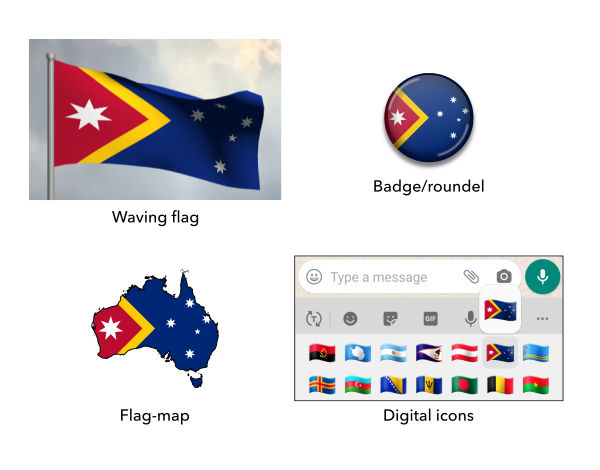 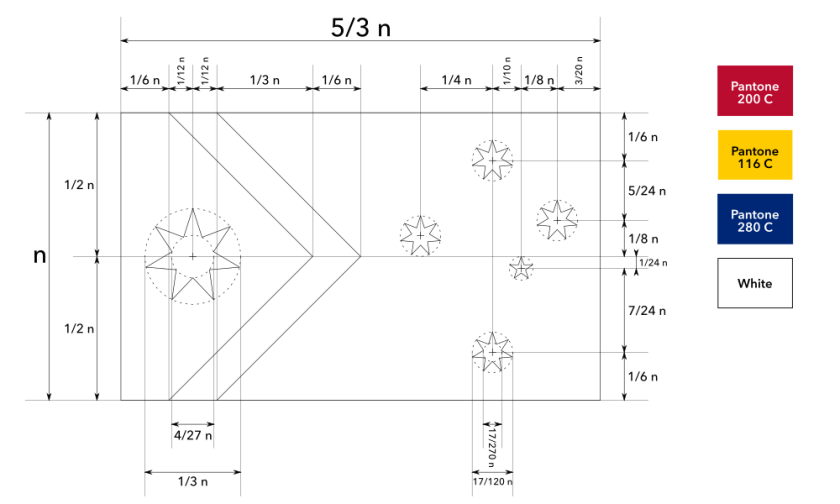 This one was actually the precursor to Advance. It has more explicit Aboriginal symbolism but has more colours. 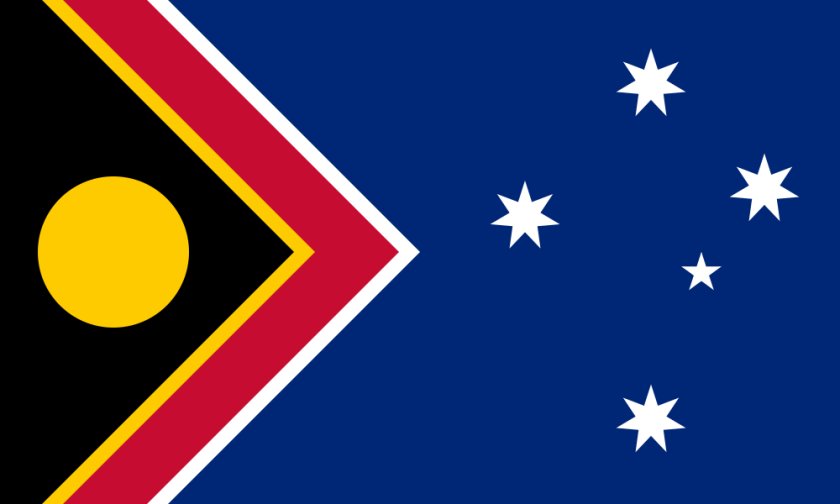 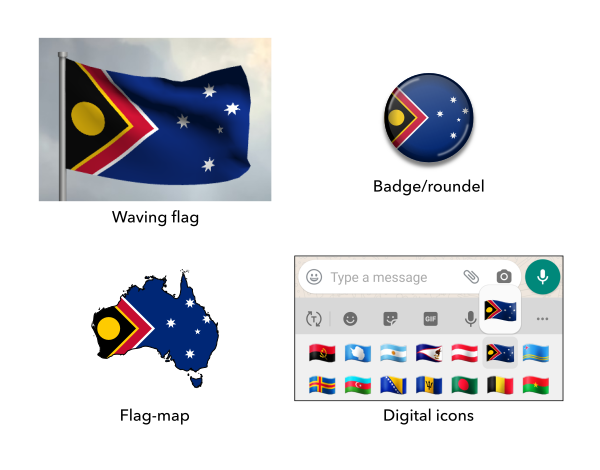 Mock-ups for Reconciliate and Advance 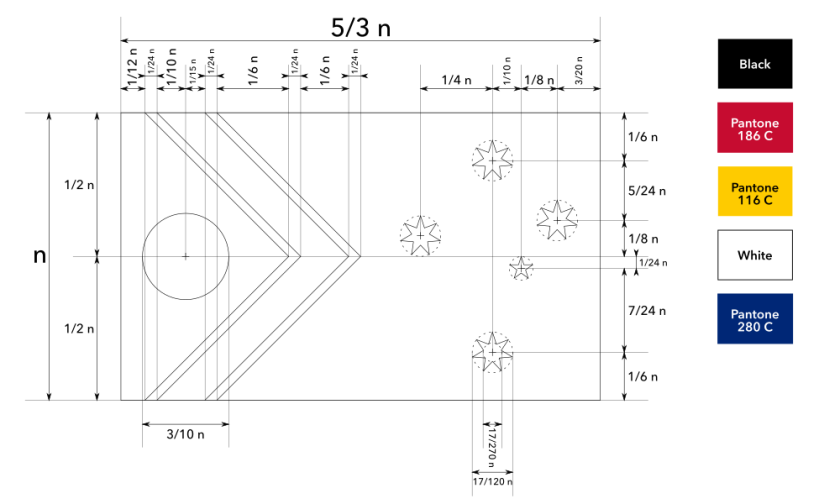 Construction sheet for Reconciliate and Advance

2.3 The Triptych of Australia

As the name suggests, this design is meant to be read as a three-part story from left to right.

It has the most colours of all my designs but that’s deliberate. 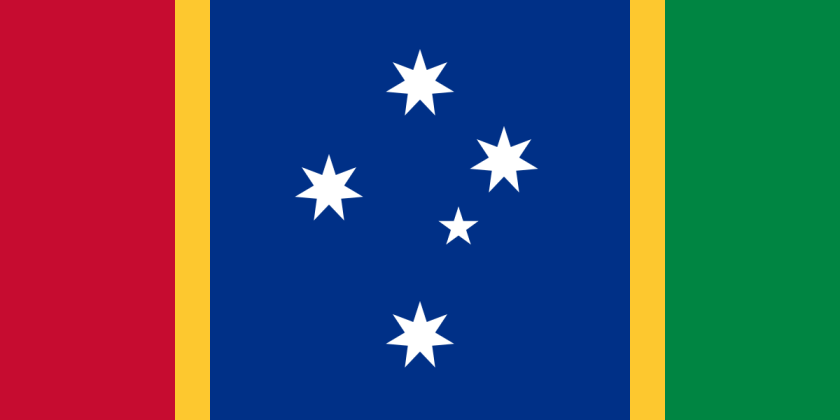 The Triptych of Australia 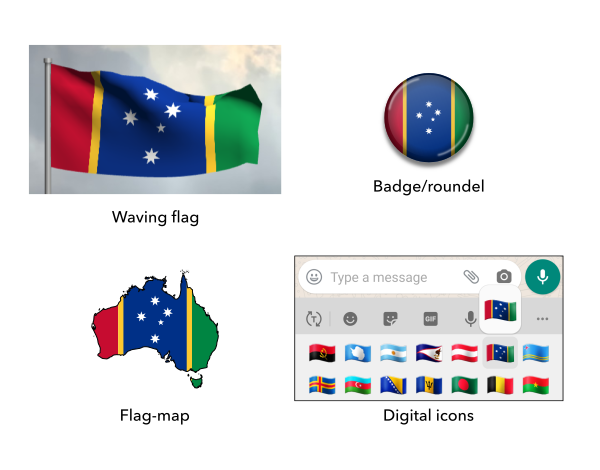 Mock-ups for The Triptych of Australia 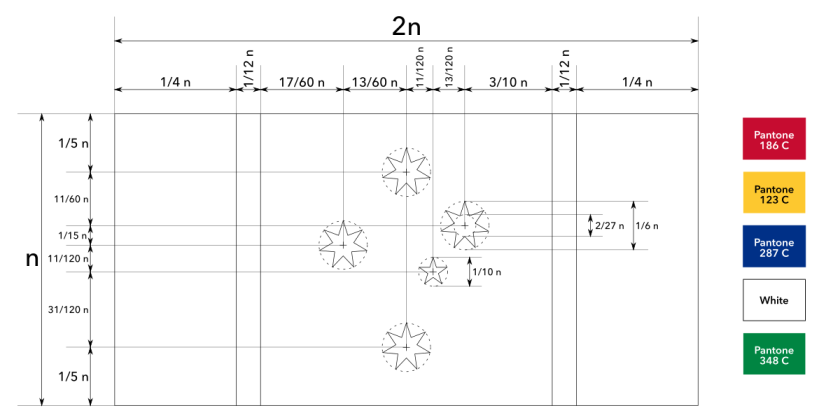 Construction sheet for The Triptych of Australia

This one is also nice and simple. However, for some, it suffers from a lack of a single focus. 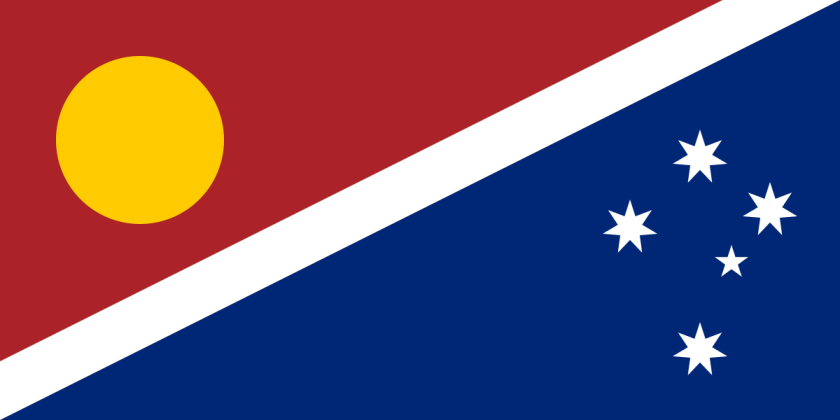 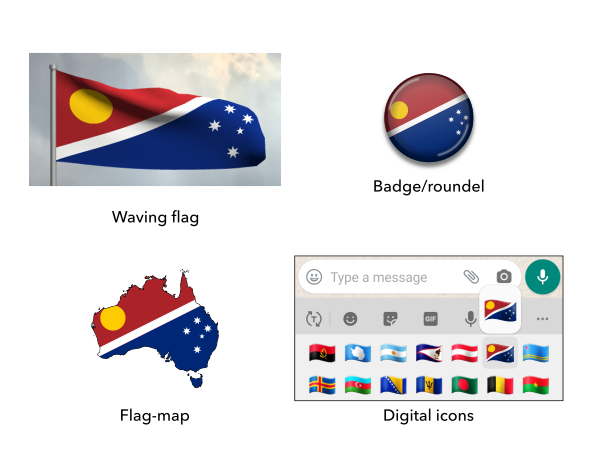 Mock-ups for Sun and Stars 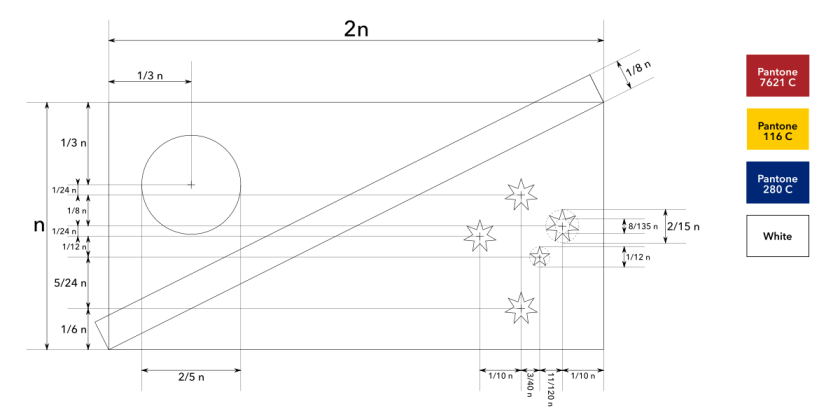 Construction sheet for Sun and Stars

These ones didn’t make the cut for various reasons but I still present them for the sake of interest.

This design is the direct counterpart to my New Zealand flag proposal Flourishing Together.

This one was said to be “too Aboriginal” to be accepted by Australia as a whole, which is probably true, but it looks too cool to not show it here.

Here I intended to combine the Commonwealth Star and the Aboriginal sun design in an elegant way. The current Commonwealth Star has seven points which I find to be clunky – six points stand for the six original states and the seventh point stands for all territories and future states. Since this design did not need to appear conventional, I took the opportunity to update it to nine, which I feel is more appropriate and timeless: Eight points for the mainland states and territories and one point for external territories and allies. This makes more sense geographically and is future-proofed against the strong possibility of Northern Territory becoming a state. 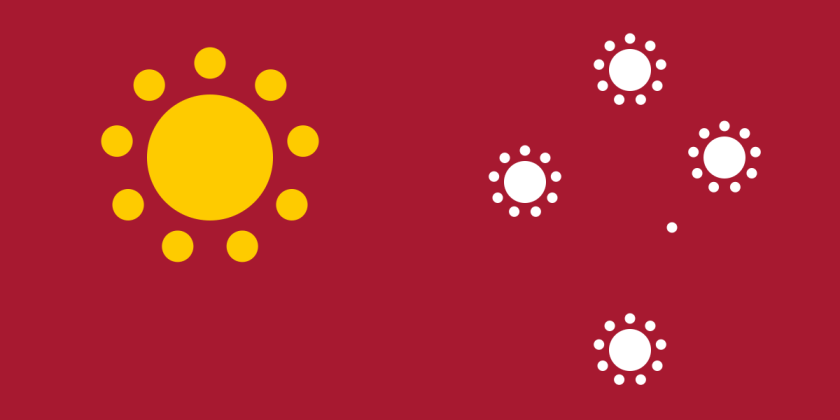 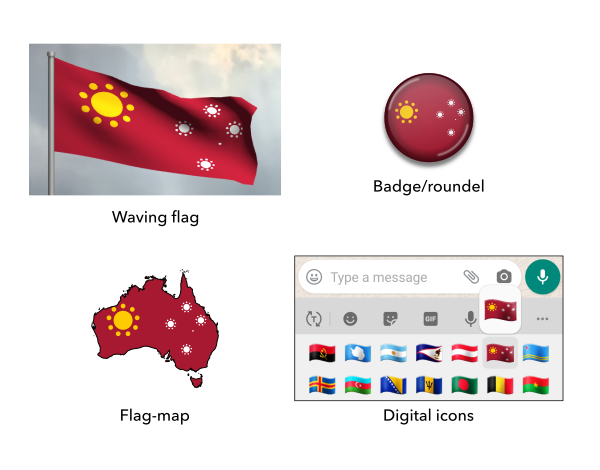 Mock-ups for Dotted Sun and Stars 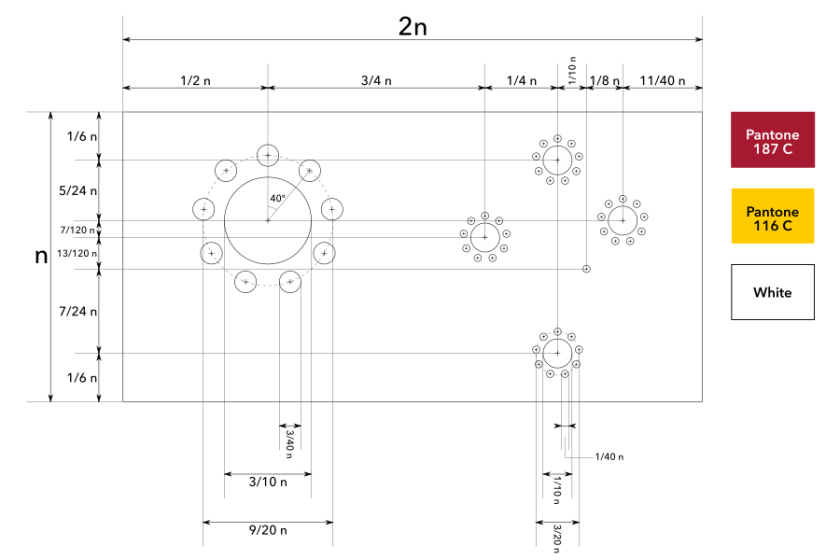 For this design, I deliberately ignored my analysis and the symbolism on the current flag. Instead, I aimed for something more eccentric. The result definitely falls into the “cheesy souvenir” trap but it is unique and has its own charm. Designs including the kangaroo always turn out like that. 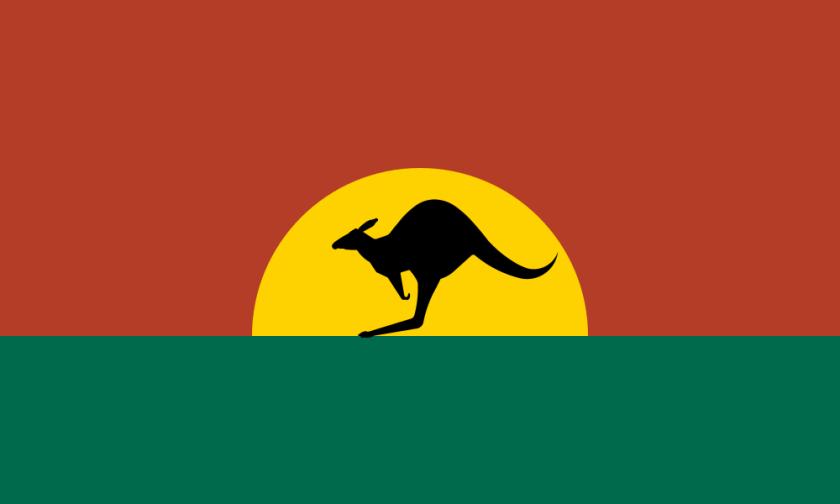 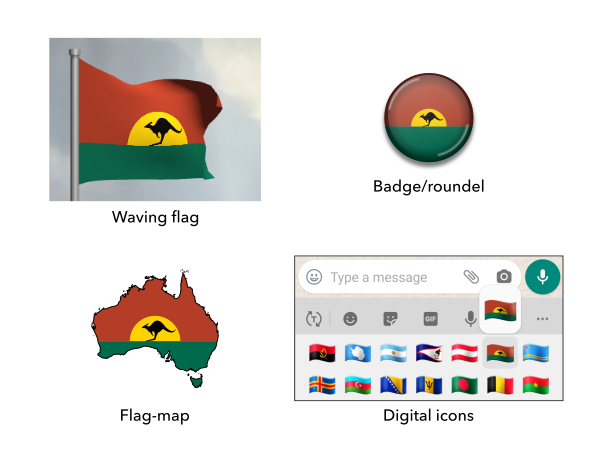 Mock-ups for The Ancient Land 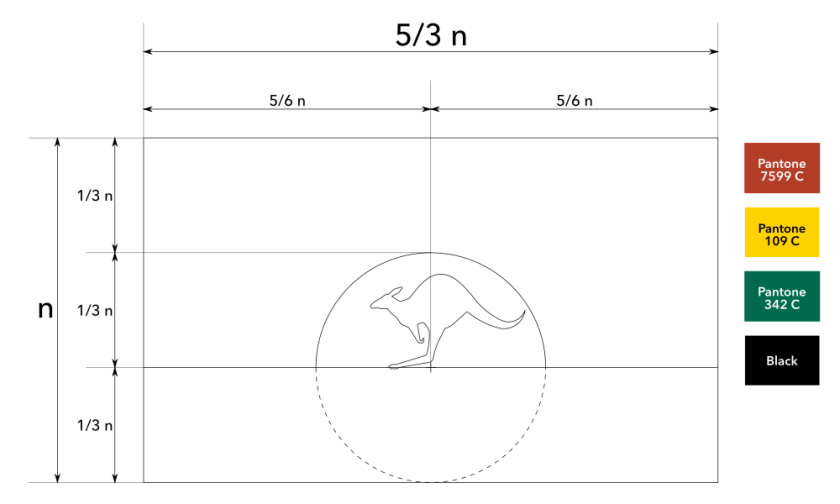 Construction sheet for The Ancient Land

One thought on “Proposed flags of Australia”